This week, I have been working on adding an unbeatable computer (UC) player to my Ruby Tic Tac Toe game.

In this blog, I will share my understanding of recursion and minimax, and my first attempt at using it to create an unbeatable computer player. In order to implement a UC Player I needed to implement the MiniMax algorithm, which also meant I needed to use recursion.

Before working towards making it unbeatable, the computer player selected a move without a strategy. It simply picked an available space on the Tic Tac Toe board at random.

The UC player should know the available squares on the board, assess all of the possible outcomes and as a result, choose the best move.

What is considered to be the best move?

The UC player’s aim is to win. If this is not possible, the next best outcome for the UC is for the game to be a tie. The opponent winning the game is not an option. A move should be selected to prevent an opponent from winning, subsequently resulting in a win or a tie for the UC player.

What is a recursive function?

My understanding of a recursive function is a function which calls itself, until a certain condition is met. It consists of a base case, and a recursive case.

What is the minimax algorithm?

In the context of a Tic Tac Toe game:

How is an outcome scored?

If the game is a tie, the outcome is scored as 0. The maximum points a winning player can obtain is 10 (or -10 in the case of an opponent).

As a mentioned above, when a mark is added to the board, the recursive function is being called again. My understanding is by keeping track of the depth (how many times the recursive function has been called), this helps to assess the outcome of the game. The aim is to win in the fewest moves. Therefore a win in 1 move should have a higher score than a win in 3 moves

As a mark is added to the board (another recursive function call, increase in depth by 1), the depth is subtracted from the player’s maximum score.

For example, here’s a scenario:

A Visual Example Of The UC Player Using Minimax

Expanding on the above, the example below presents a scenario where the UC player has three available squares it can choose from (3, 4, and 9). It demonstrates all of possible outcomes being played.

The UC player (x) is the maximising player, and the opponent (o) is the minimising player. I’ll explain all of the possible outcomes in more detail below. 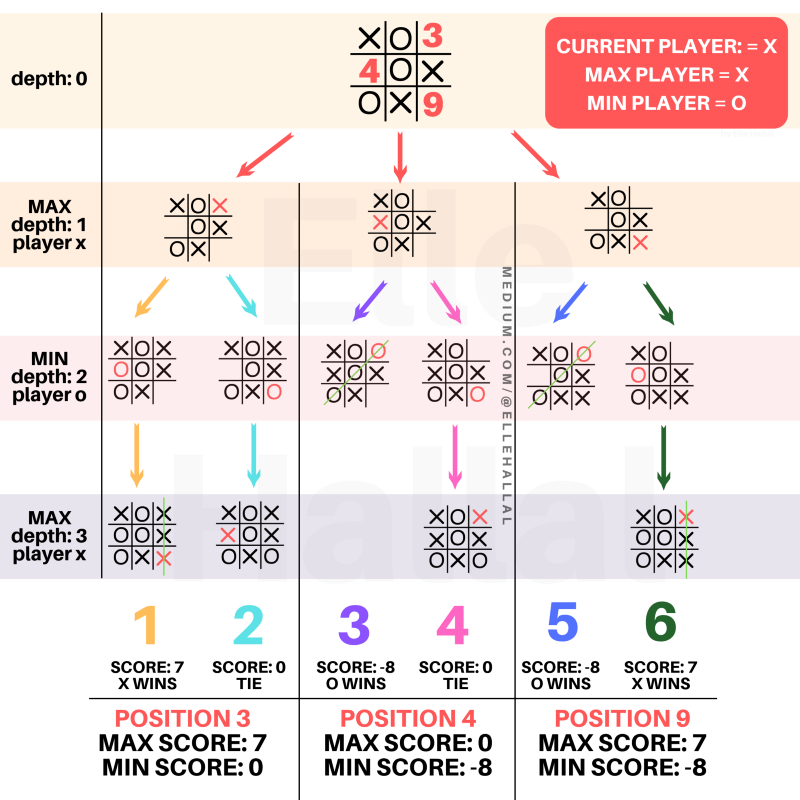 The image to the left demonstrates the following:

The outcome is a winning line for the UC, after a total of 3 positions have been played.

The UC has won, so the maximum score is 7. Remember the maximum points the UC can get is 10, and the depth is subtracted from this.

To the right of the image:

The outcome is tie, neither the UC or the opponent has a winning line. The minimum score is 0.

In conclusion, for position 3:

In the above diagram, the UC plays position 4. When doing this, both outcomes result in the UC not winning, and the opponent wins in one.

In conclusion, for position 4:

The maximum score is 7, as the UC can win in one of the outcomes at depth 3.

However, the minimum score is -8, because the opponent wins in the other outcome at depth 2.

Although the UC can win by choosing position 9, the opponent can win on the next move.

In conclusion, for position 9:

Using the scores to select a best move

My understanding is the UC player’s aim is to ensure the opponent obtains the minimum amount of points possible. The higher the opponent’s points, the higher its chance of winning.

Therefore, the best move is square 3 🎉 with the maximum score of 0 for the opponent (minimising player). This position results in either a win or tie for the UC player. The opponent has no chance of winning.

In theory, the above sounds great but how can it be implemented to create an unbeatable computer player? In all honesty, I found translating the above into code extremely difficult.

There are many examples, blogs and videos demonstrating numerous ways to create an unbeatable computer player using minimax. You can find the resources I found helpful at the bottom of this blog post. In this explanation, I’ll try to explain each part of the function.

Before I begin, here is the Minimax class I created. It contains the find_best_move recursive function, which the unbeatable player will use.

The purpose of find_best_move’s parameters

board is needed in order to:

The base case for find_best_move

As mentioned previously, in a recursive function, there should be a base case, which will stop the function if it is triggered. Here it is:

If the game is a tie, or either player has won, the game is over. As a result, the recursion should stop. board.stop_playing? returns true if this is the case.

The outcome of playing the initial square should then be scored and returned, to be added to the best_score hash.

A separate method score_move returns the score depending on the outcome.

Why is the return value of the recursive function multiplied by-1?🤷🏽‍♀️

This is something I’m yet to grasp, but here’s a quote from a blog post, explaining the reason:

“Multiplying the return value by -1 will ensure you get either [a positive or negative score] depending on who is last to move. If the game is won on any odd move (1,3,5,7,9), the result will be [positive], which means the current player has won the game. If the game is won on any even move (2,4,6,8), the score will be [negative], which means the opponent would have won the game.”

The last part of the find_best_move function is to evaluate the move. My understanding is if the depth is not zero, meaning the recursive function has not returned to the first function call, then return the score.

If the depth is zero, the best move is to be returned as the UC’s player’s move.

For example, position 9 was played and the score for the outcome was 0 (a tie). If depth = 1 the score needs to be returned. Remember the best_score hash that’s in the initial recursive function at depth 0? Currently it looks like this:

It needs the value (0) to match the key (9), to complete the hash. As a result of calling evaluate_move, the score will be returned, and the best_move hash becomes:

When depth = 0, the values (scores) of each key (available square) in the hash can be evaluated with evaluate_move. The key with the highest value is returned. In this example, the best move is 9.

You can find the repository for my version of Tic Tac Toe, in Ruby here: https://github.com/ellehallal/ruby-tic-tac-toe

If you enjoyed reading "Creating An Unbeatable Computer Player Using Minimax", please consider sharing it:
Previous post:
Testing Output With RSpec
Next post:
What Is The Dependency Inversion Principle? 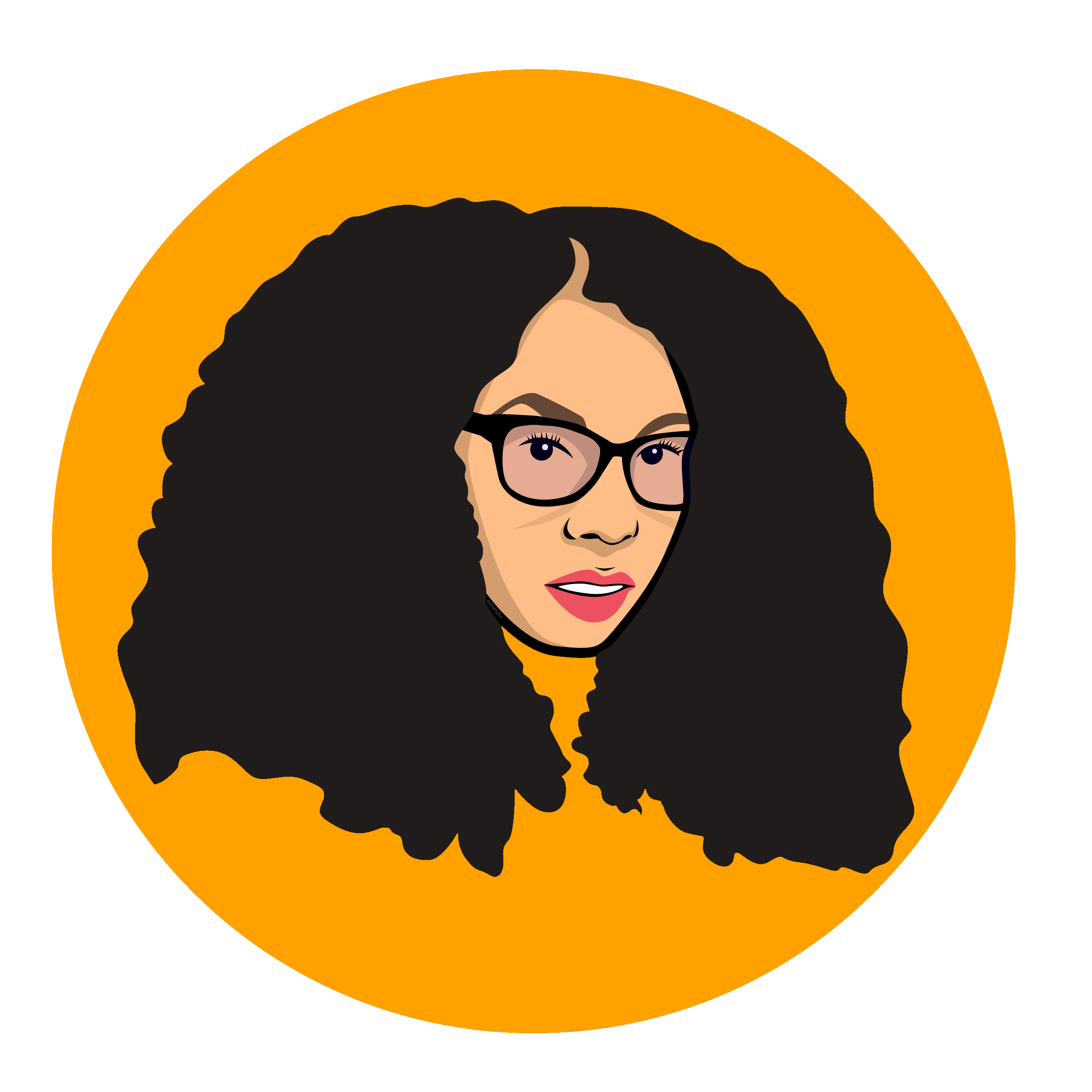